This isn’t your typical watering hole. There you are, hungry, starving even.  You’ve had beers with a few of these colleagues before, but you’ve never actually sat down to, well, “break bread” with them, especially at some Michelin Star restaurant. You can’t remember how many rolls there even were in this communal basket of bread originally, but you know that there’s only one left and it’s chanting your name.  This particular roll has been sitting there, unattended to for at least seven and a half minutes, not that you’re counting. You debate reaching for it, but you don’t want to be the greedy one, nor do you want to be considered rude.  I mean, what if Stacy in marketing really wanted it and you read the table mood wrong? Instead of waiting that last final moment so she could feel confident enough to take it, you swoop in like Tarzan-before-Jane and then she hates you forever? She really needs to learn to speak up! And what would everyone else think of you?

“There he goes again, just hogging all the carbs.”

“He didn’t even notice that so-and-so hasn’t even had a slice yet.”

“He took TWO pieces and there was only enough for everyone to have one!”

It’s so stressful; it just makes you want to order a whole crate of baguettes for the table.  But what if this place charges for refills?  It wouldn’t be outlandish if they did.  You know, it was a pretty high-quality roll, dissipating in your mouth like a starchy dream.  Not to mention it was also served warm, which everyone knows is a sign of a classy place.  And ritzy venues like this wouldn’t remind you of the price when you asked for more.  Not a single waiter would say, “Of course I can bring you more bread. It just costs $100 extra. Is that okay?”  Instead, here, they’d probably be like, “Right away” and then tack on a herculean amount of money to your already outrageous bill.  Then you’re “the guy” who makes everyone split an even bigger check and is resented for eternity, likely never to be asked out to a work dinner again.

“Remember last time? I mean, c’mon.  No one even wanted more bread. The nerve.”

“We couldn’t even afford college for Timmy after our last dinner.”

Ultimately you’ll most likely die alone with your cactus, only to be found days later by your neighbor’s cat who will smell your decaying body.  Everyone in the apartment complex will be wondering, “How come no one knew something was wrong? His body was there for over a week!”

Mrs. Brown down the hall will say in her loud, accusatory tone, “I thought he had friends. Did no one wonder why he hadn’t called them back?”  She has the kind of voice that will reverberate down the hall like some kind of P.S.A. announcement alerting the entire city of your lonely demise. Then, one of your colleagues will pipe up, “Oh, yeah, well, he ordered an extra very expensive bread basket at dinner a few months ago and it was just, well, we couldn’t maintain a relationship after that. I mean, who could be friends with someone who would do such a thing?!”

You were only trying to be helpful.  Someone has to either take the last dinner roll or be willing to watch you take it.  It makes even less sense to waste it out of common courtesy. The restaurant is just going to throw it in the garbage at the end of the day.  It’s actually very environmentally friendly of you to heroically volunteer your stomach for this caloric consumption. And when all the buns in the basket are nonexistent, someone has to step up for the shy people who really do want more but feel it’s egregious to ask for some. Somebody has got to be the spokesperson for the hungry; stand up for those who can’t speak for themselves! There’s even a pad of butter still left on the table! Now if that’s not a sign to demand another loaf, you don’t know what is.  You’ve got to do it for the equality of dip to vessel ratio if nothing else.

Stupid societal norms.  Who even invented them anyway?  And we know they were invented.  It’s not like the first chimpanzees sat around a pile of bananas, hands crossed in their laps, politely debating amongst their troop over the last one.

“This one practically has your name on it.”

Hell no.  They’d poke out the eye of their mother for more of that yellowy goodness.  You look up across the table to see you if have any competition.  You’re totally alpha chimp, no question.

Why is this so uncomfortable?  It’s especially disagreeable for those who are not in the best shape – and this includes you indefinitely.

You can hear the office gossip now: “He’ll never get his figure back if he keeps ordering bread as if it’s the Last Supper.  I mean, do you know how many calories are in those rolls? Billions.”

If you take that bread, you know you will become the helpless overeater and the judgment will be tangible.  You imagine Stacy, who seriously isn’t in a position to judge, and probably also really wants that last piece, look at you with her beady eyes that just say, “pathetic.”  It’s just a slice of baked goods, lady!  It’s not like you’re going to take one bite of it and suddenly your belt buckle will burst off with a pop, hitting Stacy with such force that she can never see out of her right eye properly again. But, nooooo, you have to sit there with your stomach growling like a hurricane. Until the single 4-inch square of ravioli , in handmade duck urine reduction sauce , gets placed in front of you as if you’re being presented with a new baby who already knows five languages.  And that arrival will be at least fifteen minutes from this barren Sahara of near empty bread basket syndrome.

You could always sneak off to the restroom and absentmindedly walk by the kitchen, casually and coolly asking one of the cute waitresses for a little bite of ciabatta.

“Hey there. You mind giving me an extra roll from that basket?” You nod slyly towards the bread, leaning on the table like a cowboy at a saloon, whispering as if the two of you are in cahoots. “You’re super hot, by the way.”  Flattery is ever so important in this case, don’t you know.

Most likely though, she’ll examine you and hate how you’re dressed. “Who wears striped socks with those shoes? What a loser.” And she’ll tell you that she “can’t, sorry.” But maybe, just maybe, your charm, or the scent she gets of your overwhelming hunger, will get you that piece of bread after all.  Without warning, you’ll just stuff the entire thing in your mouth at once and thank her while white spittles of sourdough rocket from between your lips and land on her face to your mutual disgust.  Then, you are unable to make eye contact with her for the remainder of the dinner as it turns out she’s your waitress for the rest of the night. Just your luck. You might even inhale the bread so quickly that you start to choke and little Miss Four-foot-four will attempt the Heimlich Maneuver, spraining her back in the process of saving your life. You know your catastrophic insurance won’t cover even an iota of her hospital bills. As a result, you’ll have to move back in with your parents who will NOT be happy to see you needing to live at home again.  Your mom will look at you with her hands on her hips: “We told you to major in something more hirable.” Then she’ll turn to your dad, “Didn’t we?” And your dad will nod in agreement as he gets the last word, “I mean, Philosophy, son?” What were you thinking?” He will shake his head slowly towards the ground in obvious disappointment.

You just can’t do that to your parents.  They already housed you for two unemployed years after graduation while you were in the basement with Sartre and Kant “discovering who you truly were.”  They love you and all, but everyone knows that the parents who truly unconditionally adore their children keep their rooms just the way they were left; set up like shrines to the brilliance of their amazing offspring.  Yours have probably already turned your old room into a home office, a gym, or worse, rented it out your ex-girlfriend.  Let’s be honest: They like you and all, but not enough to have you back at this point in their lives.

You notice that your leg is starting to twitch.  A nervous hunger tick you can’t control.  It will soon start sending waves through your whole body—you just know it. See! You need another bun so that your restless hungry leg syndrome can stop, if only for the sake of the table and relief of your fellow eaters.  You know if you keep shaking your foot that the table will look like an earthquake zone in about 30 seconds, the water glasses rippling like a T-Rex is coming for you and that last breadcrumb. You’ve got two choices now: Be the King of the Jungle and order more bread for the basket, or be the guy who took down the table at a five-star restaurant.  You hold your leg down with both your hands, a bead of sweat forming on your brow.  Find something else to do, you tell yourself.  Wine.  There’s wine.  You can pass the time sipping fancy-ass merlot.  You reach for it. It has just enough left for one last glass. But what if someone else was waiting to have it?

Writer: Caitlin Orr is a writer of quirky short stories and a lover of wonder. She is a graduate student in creative writing at Mills in Oakland, where she lives with her girlfriend and her beloved dog, Cornelia.

Artist: Harrison Roig is a Graphic Designer who is working toward specializing in typography and logo design. He is a person who loves to think outside of the box for designs. His work stems from being creative and showing people that both he and his art are all about having fun and keeping things exciting. 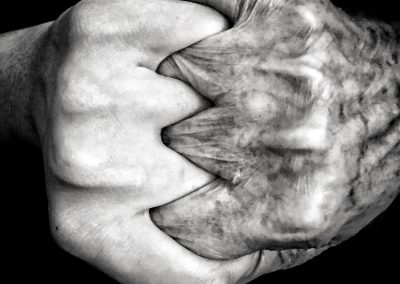 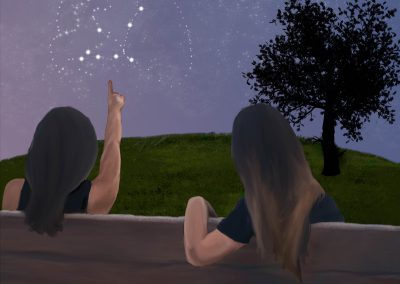 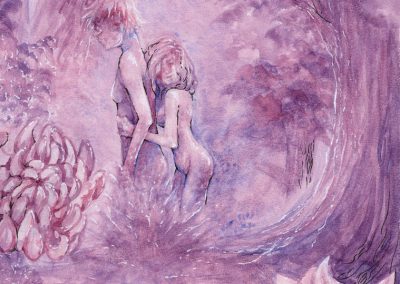 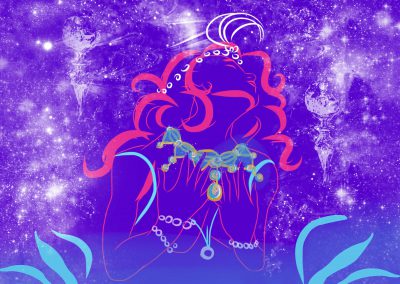 Sestina of the Twenties 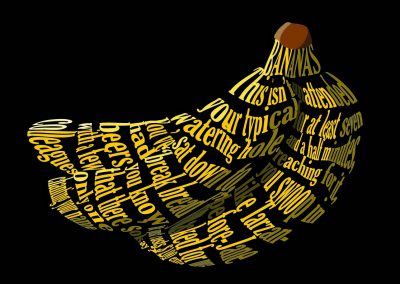 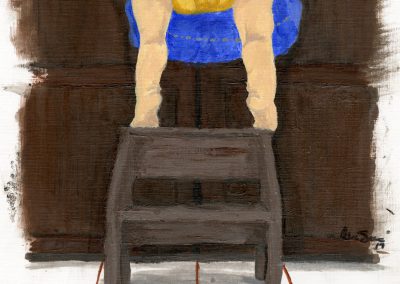 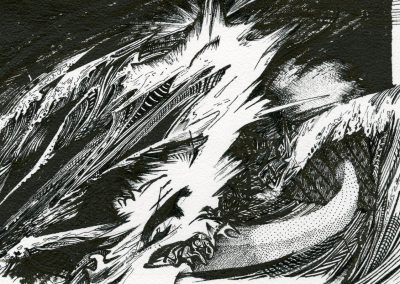 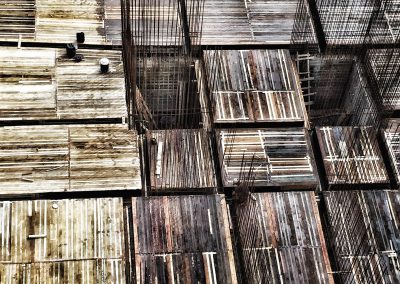